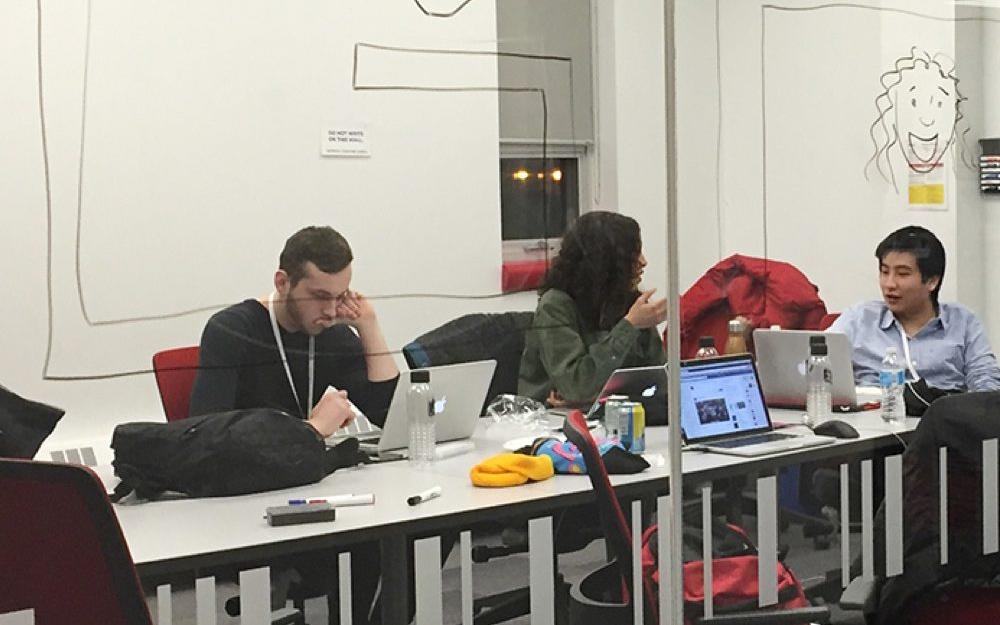 Stratford, ON – Four University of Waterloo Arts students took the top prize in the first-ever Game Design Camp at the University’s Stratford campus. Calling themselves “Team GASP,” the four Global Business and Digital Arts students bested more than 100 other competitors with their prototype for a colour-matching game called Hylo.

The Game Design Camp was a partnership between two hubs on the Canadian Digital Network: the University of Waterloo Stratford Campus, and the Waterloo Accelerator Centre, which offers commercialization programming in Stratford.

Over the course of the weekend-long event, more than 100 Ontario college and university students formed teams, participated in workshops about game play and digital design, and then developed, built and pitched game designs to a panel of judges.

Armed with production specifications, teams worked to create a “one button” game that could be played on the three-storey wall of Christie Digital MicroTiles in the atrium of the Stratford Campus building. Using a single button as the only player input, games needed to be simple for users to pick up and play with little instruction, and needed to last no longer than five minutes, including any introductions, rules or game credits.

Finally, all games needed to demonstrate the potential for commercialization, including a framework for marketing.

Industry mentors were on hand to coach student teams throughout the weekend on aspects of design, illustration, user experience and commercialization.

Judges for the final five games included Ginny Dybenko, who runs the Stratford Campus, Neil Randall, director of the University of Waterloo games institute, and Bob Rushby, who holds the patents on the technology behind the Christie MicroTiles. Rushby is also a mentor with the Accelerator Centre.

Following a five-minute pitch and game demonstration, the judges quizzed student teams on the anticipated market for their games, the thinking behind their designs, and any improvements they would make on the prototypes.

Team GASP wins a spot in the Accelerator Centre’s Pathfinder Program to allow them to commercialize their game, as well as gift certificates for the Steam entertainment platform.